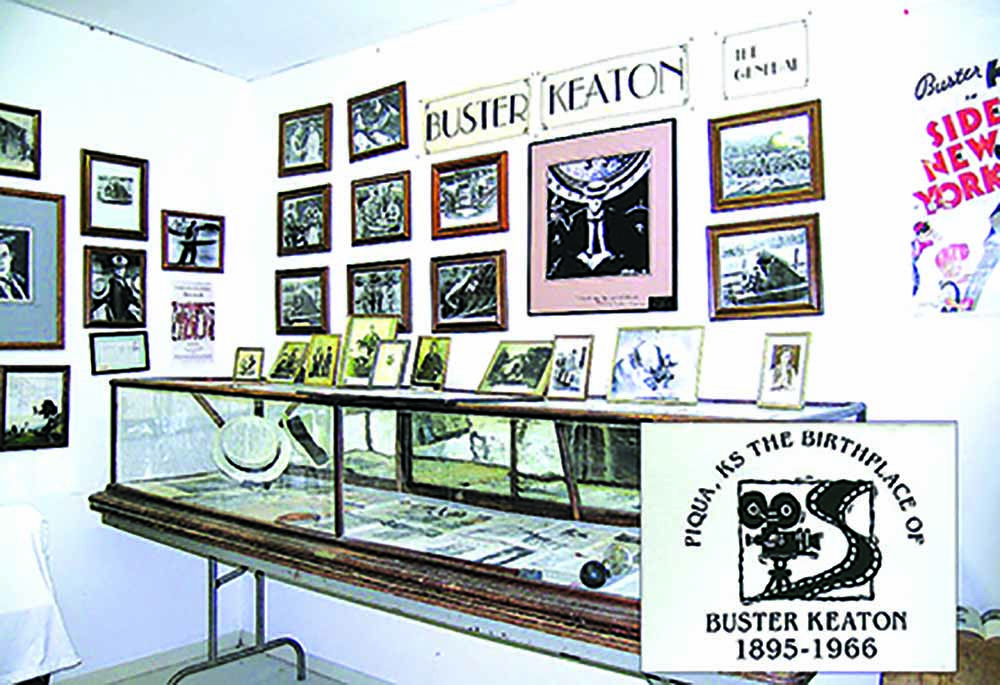 Buster Keaton: The immortal clown with the immovable face

Sometimes nature itself seems to herald the birth of something magnificent.

The date was Oct. 4, 1895, and tornadic winds were rising and beginning to whip and tear near the Woodson-Allen County border.

A vaudeville troupe of actors suddenly found themselves stuck at the rail junction in Piqua, including Myra Keaton, who was multiple months pregnant.

Perhaps it was stress brought about by the weather, or was simply his time, but that night Myra gave birth to her son Joseph in a hotel not far from the railroad tracks.

One imagines a strange nativity there, with curious actors still in stage dress crowded around windows and doorways to catch a glimpse of the child who would become perhaps the greatest star in all American film history.

Was Joseph Frank Keaton crying and bawling when he came into the world, or was his face already made of stone?

HE DEFINITELY wasn’t “Buster” yet.

Legend has it that the name was given to him by the illustrious Harry Houdini, at least in Keaton’s version of the story.

Supposedly the young lad took a fall down some stairs in the world-famous magician’s presence, upon which Houdini roared “That was a real buster!”

It wasn’t the only time he earned the title, either.

As part of their family’s vaudeville performance, Buster’s father, Joe, would wildly toss the young lad around the stage, against the scenery, and into the orchestra pit/audience.

The perceived violence of the show was so great that audiences often called the police, and the Keatons would have to explain that it was only stagecraft.

The hotel Buster was born in is long gone, yet there are multiple subtle reminders of what happened there.

A rough, often muddy street bears his name. A black and gold plaque tells his story. And best of all, a small but nonetheless packed museum is hiding inside the water and utilities building near the birthsite.

You’d never know it was even there given the absence of signage.

However maybe that’s appropriate, as it resonates with a certain legend about Keaton's own relation to the place.

One acidic local tale was that the time Keaton visited Piqua, he had his limo stop only long enough for him to turn his nose up at the scene.

He’d gone too far to ever return.

However, in recent years the local Buster Keaton Society was able to dispel this version of events, after being gifted photos of Buster standing in front of the Piqua depot, taken by wife Eleanor while the two were on a road-trip.

KEATON eventually went a very long way from the simplicity of southeast Kansas, that’s for sure.

Given his catalogue, Roger Ebert called him “the greatest actor-director in the history of movies,” and Orson Welles proclaimed that Keaton’s black-and-white masterpiece, “The General,” was not only the greatest comedy of all time, but the greatest film of all time.

Keaton worked with Fatty Arbuckle and started his own production unit, and he became one of the most death-defying stuntmen in movies (often destroying dozens of his signature pork pie hats in the process).

Eventually Keaton would star in films with sound and color, commercials, short cuts, educational pieces and television series (including an episode of “The Twilight Zone” where he was a time traveler).

My personal favorite is “Speak Easily,” a “talkie” where a mild-mannered professor, falsely believing he’s inherited a vast fortune, decides to quit his day job and embark on various misadventures.

YET AS with so many stars in film and other creative endeavors, Keaton led a very troubled and tumultuous life.

His creativity and drive for artistic perfection seemed to have led to a whole host of troubles, which, all too often, have been glazed over to create a more wholesome and whitewashed version of the man.

He was enraged after being stripped of creative control following “The General.” His later contract with MGM was a disaster. And his divorce from wife Natalie Talmadge led him to a place of nihilistic despair characterized by life-threatening alcoholism.

Keaton would eventually be institutionalized, where legend has it he escaped a straitjacket thanks to a trick learned from Houdini.

In 1933, he married his nurse, Mae Scriven, during an alcohol binge, and afterward claimed to remember absolutely nothing.

And perhaps strangest of all, he began collecting Saint Bernard dogs, all of which, inexplicably, were named Elmer.

DESPITE OR more likely due to all his eccentricities, Keaton would nonetheless emerge triumphant after a period of agonizing loss, even if he never returned to his former level of stardom.

And by accident of his birth, his legacy is ours to claim in Woodson and Allen counties, if we are brave enough to embrace his strangeness.

Certainly we can watch Keaton’s films, even hold festivals in his name, though to me the most interesting question is, once we’ve done so, how does this transform standing on the edge of Piqua? How does memory change the place?

If Keaton entered the world there, does that spot retroactively bear a haunting trace of his specter or his work or its influence?

Does the land vibrate with some strange frequency at the junction where Keaton tore his way into a world to which he never quite seemed to belong?

AS VEHICLES tore by along Highway 54 near the Piqua Co-op silos, I stood near the place where Keaton was born and simply listened.

The winter wind was still and the sky snowy white.

Though buried in the Hollywood Hills hundreds of miles away, did Joseph Frank maintain any power in this place?

Were his two stars on the Boulevard shining?

Not that one could ever glean such a thing from the immortal clown with the immovable face.