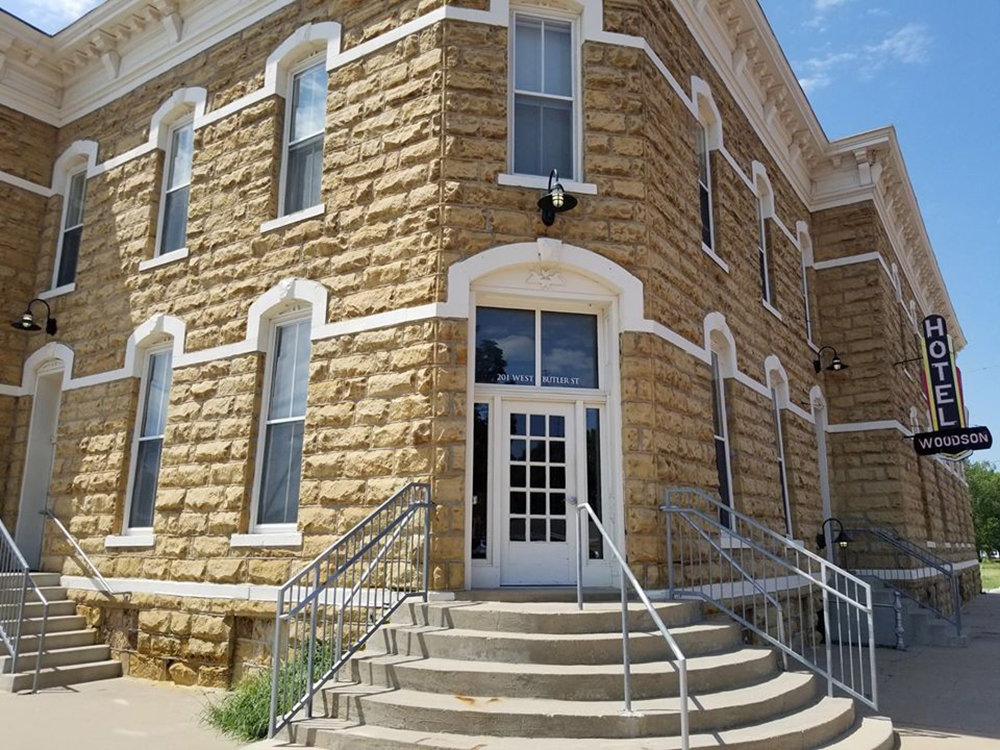 Yates Center's Hotel Woodson has been a part of the community for more than century. Among its guests in the days of yesteryear was Buffalo Bill Cody.

YATES CENTER — The wind was blowing steadily from the south, and my breathing shallow, as I sat catty-corner from the Hotel Woodson on Yates Center’s town square, watching the vehicles pass.

My favorite are the golf carts, which folks around here use as a kind of inverse convertible. Instead of the top being down, it’s the only thing that’s up.

I asked my friend, four-branch veteran and unapologetic Kansas Democrat, Troy Shaffer, if he chose to live in the hotel given its incredible past, but said his decision was based on cheap rent as opposed to nostalgia.

After some pestering, Troy gave me a tour of the hotel, where he confirmed the tin ballroom ceiling and sleek wooden bar are indeed original, though the floor plan has been converted from twenty-one small rooms into four large ones.

In a letter written by Edwin Guy Reid, son of the hotel’s original owner, he recalls having to swap every stained-by-who-knows-what sheet, shove coal in all 12 stoves, fill all the oil lamps and burn endless piles of garbage.

He also added: “in the morning you would have to … [e]mpty all the slop jars and carry all the waste water down back of the hotel and dump it.”

You can imagine poor Ed trying his best not to gag as he repeatedly descended the stairs before reaching the hog pen.

In his nasal drawl Troy pointed north, remarking “Now, all the outdoor toilets and everything was back there, too. And the well. There was a big well. It was 1887! You still had to have water. There was prolly a dresser and a water pitcher in each room, you know, to warsh up in.”

No amount of water, though, I imagine, was enough to fully exorcise the ghostly residues of countless ragged prospectors and cattlemen, belaced prostitutes and cigar-smoking oil barons.

ABOVE THE hotel’s cream-colored corbels and Victorian era moulding, the sky was a single shade of periwinkle.

Its monochromatic expanse was oceanic, as if one could turn the world upside down, the air would possess a solidity that would allow one to reside within it, be held in the arms of that vastness and receive something ineffable and uncannily still.

It dawned on me just how many sandstone blocks there are lining the hotel’s facade, but I didn’t have the patience to calculate them.

When next we see one another let me know what number you came up with, as I’ve yet to find consensus among counters.

Don’t worry. We have ample time for such things in this place where the clock hands crawl, present and past bleed into one another and divisions between culture and history break down.

One feels this most acutely, I think, at night — when the streetlights gleam eerily and the wraiths of Yates Center begin to murmur aloud.

A SQUIRREL scolded me from the tree behind my back, despite my having arrived first.

A passing golf cart then compelled me to analyze the brick streets paved in the early years of the twentieth century, particularly the intricate weave at the corner of Butler and State Streets.

Frank Butler was a confidant of town namesake Abner Yates, and instrumental in the campaign to make Yates Center county seat. Despite the town eventually taking his own name, Yates had wanted to name it “Butler.”

My attention directed at Butler Street, I was reminded of when Troy told me he was born on the Yates Center square.

“A block off of it, yeah,” he explained. “It’s straight down there. Dr. [Harry] West delivered a lot of babies in this town!”

Looking south down the street to where Troy had pointed, my sight first turned to the intricate sandstone arches of what was once T.L. Reid’s “Livery, Feed and Sale Stables.”

A flier for the shop advertises renting a team and buggy for weddings, picnics and funerals.

People used to comb the manes of horses there in front of the tall, three-door entryway. Now they cut human hair one building down at Hairbenders Salon.

When acts like Buffalo Bill’s Wild West came to town, according to Edwin Reid, “A couple cabs from the livery stable were rented, and the horses decorated with banners and plumes, as they would parade around town advertising a show.”

Bill Cody himself caused quite a ruckus, it seems, “filling up with booze and getting pretty noisy.”

He and his crew were tossing back whiskey like water and pinching grapes, shooting the juice at one another, when a waitress named Daisy Obanjon slipped in the mess they were making.

Dishes leapt and crashed to the floor, porcelain shattering into shards. The hotel manager, Edwin’s Canadian-born father Thomas, then confronted Bill and got squirted in the eye with grape-juice for his trouble.

Irate, he seized Bill by his long wavy hair and yanked him from his seat. T.L. would eventually become sheriff of Woodson County and feared neither man, god nor legend.

“Believe me you never saw such a fight,” wrote Edwin. “They wrecked the dining room office and mother ran out in front of the hotel with an old dinner bell and started ringing it. … Show people had a hard time putting up at the hotel after that.”

THE SKY’S soft blue had become pierced by jet-black vultures. They circled the immense white water tower to the north, reminding me of the smaller rust-colored tower that fell into disuse during my lifetime.

Perhaps I’ll have to scale the water tower at some point, get a prey-bird’s view of things, dream when the entire hotel block was an orchard.

That’s what this sojourn home is about: seeing, regarding familiar things for the first time.

Take for example the trees shading the northwest corner of the square. They’re elms, but I realized I knew nothing about them.

Turns out they’re deciduous, meaning they shed their leaves in fall, covering the streets in waves of yellow, red and gold.

They are also hermaphrodites, “male” and “female” simultaneously, spreading their genes by pollen loosed on the wind.

At the dawn of their appearance 40 million years ago, these trees were evolving in Asia. Hence like so many people and things in Woodson County, the elms on Yates Center’s square are the children of immigrants.

Now they’re everywhere, leading one to forget the time when Yates Center was nothing more than a vast sheep pasture covered with acres of bluestem grass.

As Troy exclaimed, recounting when he’d once flown over town in an airplane: “To see Yates Center from the air, it’s just totally different from up there. My god, I thought that it was more open than that! It’s gotta lotta trees in it now compared to open prairie like it was!”

I noticed the wind had stilled again, American flag by the Legion outpost motionless.

Something in the way it held the light drew awareness to the warm shadows cast nearby.

The French writer Marcel Proust taught readers to observe the smallest, seemingly insignificant details in everything — and in striving for such attentiveness to the world, what is accomplished?

Indigenous people and Christians alike have both regarded life here in southeast Kansas as the Great Mysterious or God’s Mystery, and perhaps that’s what we’re aiming at.

To peer into the enigma of the everyday, engaged in a process of becoming curious about all that surrounds and bends within ourselves.