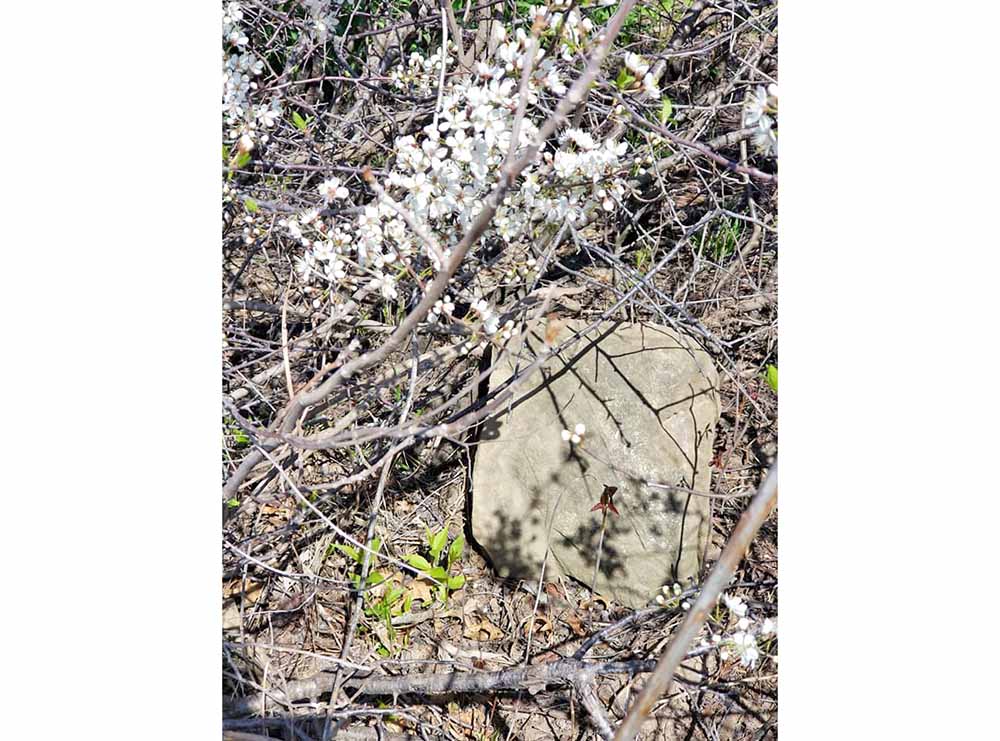 Blinded by lilies in springtime

A warm spring wind was bending the wild plum trees, scattering small white petals, when I arrived at the former Lily Church corner in Woodson County.

Constructed in 1896, and sharing a circuit with Salem Church west of Iola, the building itself stood in what is now a corn field, but if you close your eyes and concentrate, you can still hear the ghostly echoes of revival hymns that were sung there over the years.

Indeed, folks from both sides of this writer’s family once plodded down the long dirt roads there in order “to right themselves with The Lord.”

Lily Church closed in 1952, and its lumber was transformed into a house that once stood near the elementary school in Yates Center.

What endures still is the Lily Cemetery, although you wouldn’t know it at first glance. Until recently, the only trace of the abandoned burial ground was an inconspicuously uncultivated spot near the corner of the aforementioned corn field.

I say “until recently,” as last year I myself unearthed what I believe to be a crude sandstone marker belonging to one of those rumored to be buried here.

As for whom it may belong to, some possibilities include members of the Culver and Ralston families; or more incredibly, it might even belong to Dick Blandy, who had buried his foot amputated by a mower, hoping it would bring an end to his excruciating phantom limb pain.

Turning my attention back south, I remembered that it was almost possible from here to see the place where a uniquely famous Woodson countian had come into the world.

Just northwest of the US-54/Rock Rd. intersection, May Jennie Meadows was born to her family in 1871.

Meadows was a little person who stood only 3-ft., 1-in. tall, and would eventually go on to star in the Ringling and Sells Brothers Circuses.

Even more famous than Meadows, however, was her husband, William “Major” Ray.

Ray was likewise a little person and circus performer, but his greatest claim to fame came from being the image for Buster Brown of Buster Brown Shoes, supposedly inventing the look for the character.

Some dispute on this point remains, though ironically, it’s almost indisputable that the name “Buster” in Buster Brown was derived from the popularity of actor Buster Keaton, who, wildly enough, was born only a couple miles east of Jennie Meadows.

On Feb. 6, 1891, Meadows and Ray were married in Yates Center, signing their documents in the original courthouse on the northeast corner of the square.

Unfortunately, visiting their graves would be quite the trek from here, as both are interred at Hornersville Cemetery in Dunklin County, Mo.

Following the Missouri-Pacific line back towards the east, I watched as tree blossoms along the roadside began to blur: lavender, pink and pale.

And although I’m not the least bit superstitious, I always tend to hold my breath when crossing over the indigenous burial ground where U.S.-54 crosses Cherry Creek.

One body found there belonged to a revered chieftain, which isn’t too surprising, as many native people lived and camped along the creek, fanning out for miles.

The site was apparently unearthed when the highway was expanded, much like that of a pioneer cemetery near the Woodson-Coffey line that was rediscovered only to be destroyed in a petty land dispute between a brother and sister.

This burial place was connected with some early-day cowboys who’d been herding cattle throughout the region, and so interestingly enough, two of Woodson’s destroyed cemeteries are those belonging to people who pursued bovines across vast landscapes.

I soon after pulled to a stop just west of Athens, the name given to a siding on the Mo.-Pac. line during the early parts of the twentieth century.

A wheatfield to the north had just begun bursting through the soil, and so I couldn’t resist the temptation to nosh a few strands as the sun arced higher and higher overhead.

The siding at Athens was mostly used for shipping hay, and there was also a little country store there operated by at least two generations from the Caler family.

After the store closed, the building was moved to Iola and used by Lang Motor and Salvage Company for years, but apparently Athens missed its automotive garage so another one was opened there in the 1970s, same spot at the first.

While remarking on the bright plastic cemetery flowers that someone had hooked to a mile marker, I also remembered how, in the 1920’s, both of the massive hay barns in Athens burnt down, were rebuilt, then burnt down again.

One barn caught fire on Halloween, apparently ignited by some mischievous youngsters who decided to terrorize a church group with fireworks.

A spark caught some loose hay, and WHOOSH.

Remarking on hearing some of the first insect hymns of the season, I determined there was time for one last stop: the Lily Schoolhouse (District #52).

“Lily” refers to when, in 1882, after Jacob Haen painted the district’s first frame building, he said it looked like a lovely white lily contrasted against the vast green prairie.

The first, even older, #52 school actually met in a log cabin on Frederick Frevert’s claim, southwest of where the building currently sits, so the current structure is actually the third, as the frame building on Moerer farm burned down in 1915.

Classes were held in the current (also lily-white) structure between 1915-1961, and this writer’s grandmother, Opal Wagner, was one of the teachers there.

I therefore find myself wishing that she was still alive, one reason among many being that I would love to ask about her days there.

I dream her in my imagination, young and perhaps still optimistic about the possibilities of education, making the trek first from rural Humboldt and later Yates Center to stamp her daily mark upon young minds.

Making her way each morning to the shining white “lily” now crumbling to dust amidst a tangle of weeds, perhaps the world could yet be saved by knowledge.