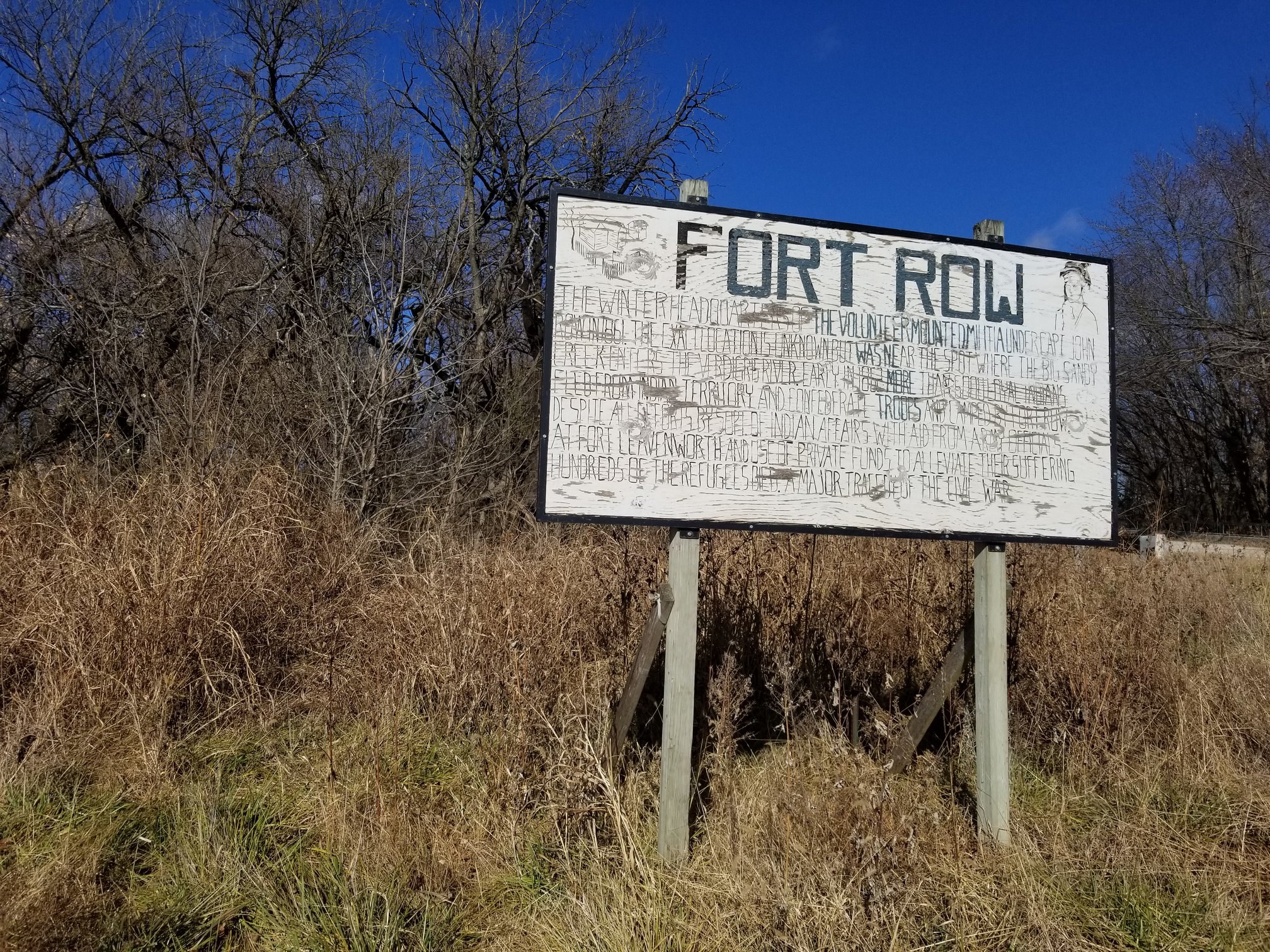 Bleeding through the frigid winter

Fort Row in Wilson County served as the site of some of the worst atrocities against Native Americans in Kansas. Thousands headed to the fort from Oklahoma. They were attacked by Confederates, then found the fort was not prepared to handle their arrival. What followed was gruesome.

The past is full of horrors.

And although they have seemingly passed, such events still haunt in the present, demand our attention and force reevaluation of our values.

One such nightmare occurred at a place called Fort Row in northern Wilson County, just east of Coyville along the southern banks of the Verdigris River.

The fort sprung up in fall 1861, built by local mounted militia to protect against the Confederate guerillas who were terrorizing Kansas from the east.

Indeed, Humboldt had just been burned to ashes by Bushwackers and proslavery men from Missouri, and hence their fears were far from unfounded.

John R. Row, the fort’s namesake and veteran of the Mexican-America War, was selected as militia captain, and he eventually had upward of 70 to 80 men in his company.

Remnants of their occupation of the river banks are few, though a large white sign with black lettering was erected not far from the site a couple decades ago, though has since fallen into disrepair.

Fort Row was built on a fairly flat area not far from the “green-gray-bark-waters” of the Verdigris, in order to provide a wide view of the surrounding terrain.

The steep river banks also served as a natural shield to interlopers, and I myself can attest to the near-impossibility of scaling them.

There were three log blockhouses inside the fort’s perimeter, and a horse stockade that backed up to the river’s edge with rifle portholes cut into its walls.

Row’s militia made the fort their home during its first winter, but in spring 1862 they abandoned their posts in order to join up with the 9th Kansas volunteers.

Shortly after Fort Row was abandoned, however, it bore witness to one of the most devastating human tragedies of the Civil War.

It began when Muskogee/Creek chief Opothleyahola was unsuccessful in his attempts to keep the tribe neutral during the conflict between states.

Not wanting to be drawn into the war, Opothleyahola set out from Oklahoma Territory to Kansas, along with 9,000 Muskogee and 2,600 people from other tribes, including Seminoles, Delawares and Cherokees.

They’d received communications from the Lincoln Administration promising that if they could make it to Fort Row in Kansas, salvation would be waiting.

On the way to Kansas, however, the fleeing refugees were attacked not once, but thrice, by Confederates, and in order to escape the final conflict at Bird Creek, they had to jettison the majority of their supplies.

Despite the bitterly cold winter, many Muskogee were without footwear and some were nearly naked, and their vast numbers overwhelmed any efforts to help them.

Without food, they trudged northward while leaving behind “a trail of blood on the ice,” across a terrible journey that lasted for over 100 miles.

Between 2,000-3,000 native people perished along that icy road, and many more would have died had they not eaten some of their trusted dogs and ponies.

By the time the vast assemblage of indigenous people arrived at Fort Row, the scene was beyond bleak.

More and more natives were coming every day, and William Coffin from the Indian Affairs Bureau was desperately pulling out all the stops to help.

He quickly burned through $10,000 in supplies, and then a combination of his own money and various borrowings.

It was all for naught.

Hundreds were starving to death in the menacing cold, and Army physicians were forced to perform dozens of amputations.

As the ground was too frozen to dig graves, many of the deceased were placed in hollow logs and dead trees, though most remained unburied.

One local account has it that many of the bodies were simply rolled onto the frozen river, and eventually so many accumulated that the water could no longer flow after thawing.

Allegedly, dynamite was used to blast the putrid mass to bloody, rotting pieces.

It’s said that when the weather warmed in spring 1862, a terrible deathly stench swept across the prairie and the earth was littered with bones.

Those who survived would move forward to Fort Belmont in Woodson County, and then an Army post at Leroy.

The conditions at Fort Belmont remained ghastly, and perhaps as a means of survival, many young indigenous men signed up to fight for the Union along the way.

Indeed, more than 1,000 braves marched from Leroy to Camp Hunter in Humboldt where they were inducted into the Union Army as the First Indian Regiment.

As for Fort Row, after being abandoned, the buildings were eventually destroyed by flooding, but that’s not to say nothing remains of these harrowing events.

Standing on the edge of the Verdigris, overlooking its muddy banks near the fort, I must admit I wept for what I felt there.

The lives of the indigenous people did not truly matter, neither to the Confederates that hunted them across the plains of Oklahoma nor the Unionists who refused to allocate adequate aid to them in Kansas.

My dreaming becomes a night-terror as I imagine them practically crawling through the snow, bleeding and starving to death, beyond the point of frozen tears, only to become so many sun-bleached skeletons.

Their terrible wailing seems to rattle and echo through the swaying trees, and their deathsong burns the very air.

What reckoning must take place to assuage them? How must we change so as to prevent such terrors from revisiting in the present?

It is not only a matter of remembering, but of challenging the dehumanization and devaluation of those who are perceived as “different” or “other.”

Only then, might one begin to make legitimate reparations in the wake of atrocity.