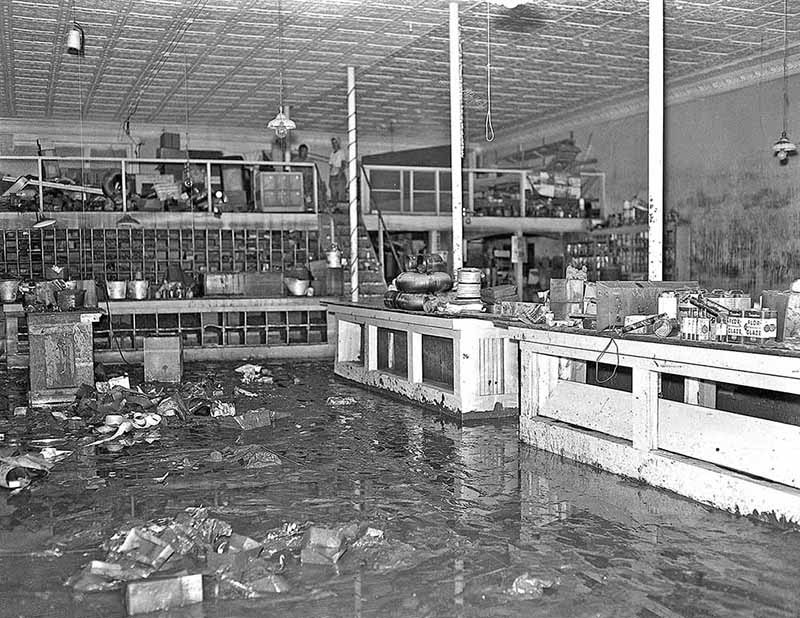 Black Friday: Neosho Falls and the flood of ’51

I was standing by the river in Neosho Falls, watching dragonflies and listening to the murky water spill over the dam in a continuous rush.

It’s a sound from the source of Neosho Falls’ life, as well as its ultimate demise.

July 13, 1951, a day later christened “Black Friday,” the river crawled from its banks, and drowned the entire region beneath murky waters 16.5 feet above the floodplain.

Residents of the Falls had been warned of a flood but didn’t panic, as they were numbed to occasional sharp peaks in the river; but instead of one or two feet of water, they got between nine and 10.

Swirling white currents entered every business on Main Street, some up to seven feet deep. Five homes were entirely obliterated or washed downstream; and many others were ripped from the foundations and twisted in place as if by enormous wringing hands.

Already-weathered stones from Cedarvale Cemetery were washed away in the torrent, and with them the legacy of so many who’d once made Neosho Falls the most thriving place in all Woodson County.

Gazing into the water, breathing its fetid odor, I dreamed the primordial beast awakening … and swallowing me whole.

EARLY in the morning on July 12, between 2 and 3 a.m., the Neosho silently crept from its confines like a ravenous liquid shadow, and residents like Lon Wright soon knew it was time to flee, as ebony water began slithering up to his porch.

Reportedly only a single house escaped, that of John Sullivan on the west end of town, and the river left behind so much mud and debris that it was up to three inches deep in some homes.

After an alarm was sounded, volunteers from Yates Center and surrounding communities deployed more than fifteen boats, carrying people to safety and then disaster centers in Piqua and elsewhere, including the main relief area at Yates Center City Hall.

Many residents reached out to others in this apocalyptic hour, bringing friends and neighbors from the Falls into their homes so as to provide them shelter and food; hence it was not only perhaps the greatest tragedy in recent county history, but a moment that showed the overflowing compassion and resilience of those living there at the time.

A systematic relief effort was enacted by the National Red Cross, headed by a field director R. Munn, who first set up a headquarters in Yates Center City Hall, then later in the swampy wreckage of Neosho Falls High School.

Many residents of the Falls had taken refuge in the school, as well as on rooftops and the upper floors of various buildings.

Those who’d managed to park their cars and trucks at the school, like Corkey Yoho, watched in horrified awe as the floodwaters devoured their vehicles (along with Cork’s cowboy boots perched atop his truck), folding them into the insatiable maw of the Neosho River.

Today the school still stands firm, built from materials almost as stubborn as those who refused to leave their homes during the deluge.

I’ve wandered its cool, dark hallways draped in bright leaves and graffiti, dreaming the echoes of children, from a time when neither hope and color were in short supply.

GIVEN the vast scope of disaster on Black Friday, human refugees were not the only ones to take shelter in the high school.

Many pets and livestock hunkered down as well, and people’s cows and chickens were kept on the school auditorium stage, creating what must have looked like some terrible and inverted Biblical nativity.

At one point opaque water even crept up to immerse the auditorium stage’s floor, and as I stood near the place, I dreamed it rising to cover me as well beneath the sticky summer sludge.

One resident remembered seeing a horse swimming by in front of the school, desperately kicking against the current, screaming horribly, but it was too heavy and too far out of reach to be saved.

On the third floor, somewhere in the school’s southwest corner, was the “dog room,” where more than fifteen canines were kept as they nervously paced and panted in the dripping July night.

I once closed my eyes in what I believed was that same room, listening, attuning, and swore I could still sense their confusion and fear.

A few humans and other creatures would weather three to four nervous moons in those near-unbreakable concrete rooms.

Other beings scattered about town were affected by fates both good and ill.

A heifer found on someone’s porch was able to be fed and milked; pigs someone had been mindful enough to heft into the back of a pickup were just high enough so as not to be drowned; and horses gathered on the old Santa Fe right-of-way survived by standing upright and holding their heads aloft.

By contrast, countless others met their ends at the merciless tendrils of the Neosho; for instance, a group of sheep owned by Kenneth Ellis whose mangled, sopping bodies were strewn haphazardly along a fence-row.

Following the cresting of the olive, muddy waters, the roads were blocked to prevent curiosity-seekers from venturing into town, but a few folks still came and went, including county health officer A.C. Dingus.

Someone ferried Dr. Dingus into town with a rowboat, whereafter he deemed the high school entirely unfit for habitation by any living thing.

Today, a few fatalistic swallows are ignoring the order.

A MAN by the name of Bille Mentzer became a local hero through the above ordeals, as he braved the menacing water for hours, saving person after person, hardly seeming to think about his own life.

At one point, after being hurled from their motorboat, Bille and his father Leslie made their way back to aid a family who said they’d fire a shotgun if they needed any more help.

After hearing gun-blasts echo in the distance, the Mentzers returned to find the family lashed to an elm tree with electrical wiring in order to prevent being swept away.

Though the family was saved, Neosho Falls as a whole was not so fortunate. Indeed, the flood would continue to mercilessly suffocate the town beneath its waters, seemingly long after the Neosho finally receded.

What’s left today, following the title of a poem by Terri Lynne Henderson, is “Abandonment.”

She asks: “Why has the waterwheel stopped the wooden spokes like paralytic hands upon the face of time’s frozen clock?”

“Why has the band silenced its march? … muffled footsteps of high-laced shoes in the dirtprint street?”

“Why have the stained glass window eyes begun to collect gray hair … from spider to web … eyes; closed … Why?”

I imagine the answer is lurking somewhere beneath river water.