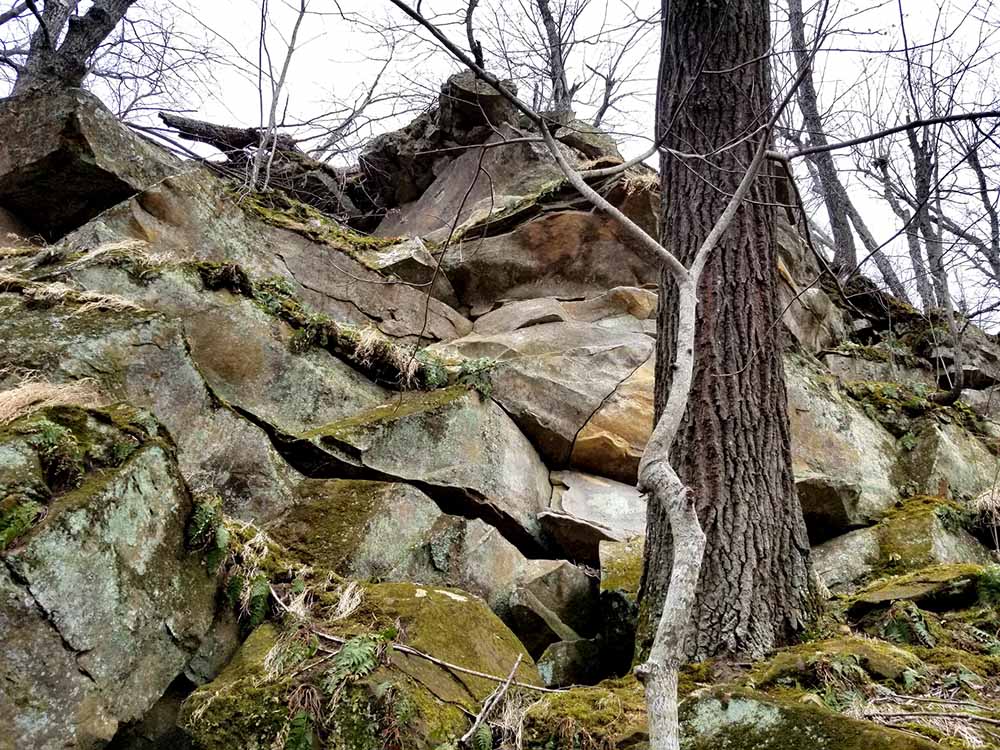 Baker’s Bluff: Bearing the weight of a mountain

Baker's Bluff in Woodson County was once owned by Baxter Baker, who paid $200 for it in 1877. It has since been carved with hundreds of names.

The sun’s sickly pallid light was fading, receding from the forest floor as I proceeded north through the timber, following the line traced by a sandstone farm fence.

I was on the hunt for a place called Baker’s Bluff, which I knew was hidden somewhere nearby, though the armadillos and whitetails weren’t providing much direction.

One pink and banded fellow trundled along in the distance, too low to notice the wind, then scuttled away on my approach.

Breaking through the undergrowth into a clearing, I paused to watch the tall dry grass shift in the wind in places where it had managed to erupt around patches of red-orange stone on the surface.

It was as if each rock was its own smooth, flat island, which made movement across the field a dance as one moved from stone to stone.

At this point in the spring, the colors of Kansas had not yet folded forth, and rather than gold and blue and green, the scene was instead largely muted and dead.

Leaves from oaks and other species crunched and crackled beneath my boots, as I dodged beneath lichen-covered branches in my black wool hat.

I dreamed Baxter Baker there, wandering the woods beside me, on land for which he’d paid a mere $200 in 1877, perhaps with a rifle in hand.

I dreamed the way he moved, swaying and stealthy, still affected by his time training for Civil War battles with Company B, in the 119 Illinois Infantry.

As he floated forth with such loping grace, you’d almost not notice he’d taken a bullet to his left leg, after being set upon by a sharp-eyed Confederate May 18, 1864.

Baxter would eventually meet his end by bronchial pneumonia in Salt Lake City, though he’s buried in Yates Center, the place where he operated a very successful lumber yard. He first, though, was buried in Belmont, southwest of Yates Center.

Slowly winding my way up Sandy Creek, I couldn’t help but also be reminded of the thousands of Muskogee refugees who’d traced a similar path during the Civil War.

They, too, had been ambushed by Confederates, and chased north from Oklahoma Territory to eventually perish by the hundreds in the frigid Kansas winter.

They, too, would be buried in Belmont, though perhaps first unceremoniously scattering the frozen ground, producing a haphazard and hellish scene.

In the haunting shadows of the evening, then, it was clear I’d become surrounded by ghosts, whether the striking figure of Baxter P., or the destitute band of Opothleyahola’s innumerable dying people.

Such is Sandy Creek: a twisting spectral walk. A place where one is never alone. Where one traverses the uncertain line between the living and the dead.

Eventually, I burst through the thickly intertwined trees and found myself overlooking the creek with its steel blue-gray waters far below.

From such a vantage, it was possible to see how the shape of the creekbed wickedly looped back and the forth like entrails, and I also noticed a rotting deer stand in the distance.

A pale white sky sharply contrasted the moss adorning the cliff on which I stood, and suddenly there was nothing between me and a giddying 50-foot drop.

I had found the bluff.

But rather than bright elation, there was something else, some other sense or feeling.

The urge to become a ghost, join the black parade.

I was perched atop thousands of tons of native rock, and yet it seemed as if the mountain were instead crushing me from above, its weight cracking every brittle bone.

What if I simply cast it off?

I suddenly dreamed Baxter Baker as a child with his sister Rosannah somewhere in Gentry, Missouri, their father having just died.

Though early youth likely spared them from full recognition of what had happened, I imagine it was apocalyptic all the same.

For with their mother Mary Ann widowed with seven children, they were soon “bound out.”

And the absurd horror didn’t stop there, either, as both their adopted parents, the Carters, died when Baxter was 14 and Rosannah 16.

I closed my eyes and listened as the wind began to wail.

Scaling and sliding down the cliff face, I struggled to keep my footing on the crumbling soil and slippery rocks.

At the bottom was a gnarled barbed-wire fence that had long-since been ripped from the earth, and nearby, a neatly gnawed tree that had been recently felled by a beaver.

From the bottom looking up, I went from merely imagining the immense crushing weight of the bluff to actually feeling it, and held my breath as I crossed between the narrow ledge separating the cliff’s base from the creek bed.

Scanning the fissure in front of me, looking for snakes, I saw no movement and proceeded forward, though still wondering if I might get a shock — like when I was reading graves in the Geneva cemetery and had instinctively leapt out of reach of an angry cottonmouth at the last instant.

But all the fear and trepidation faded as I looked up and saw the names.

There must have been hundreds carved into the soft sandstone from across the span of 150 years, perhaps by knives or railroad spikes.

Each signature, the mark of a life. A futile attempt to outstrip the inevitable by etching itself permanently in stone, even as every name already marks us for death by belonging to another even before we were born.

Perhaps that is to say the most honest place one’s name is written is on a tombstone.

“Amanda I.” and “Sarah B.,” sisters keeping Baxter warm in perpetuity, and seemingly without a jealous word between them, perhaps because Sarah Jane Brock died when she was only 23 years old, binding the survivors in a shared grief that no one else could hope to understand.