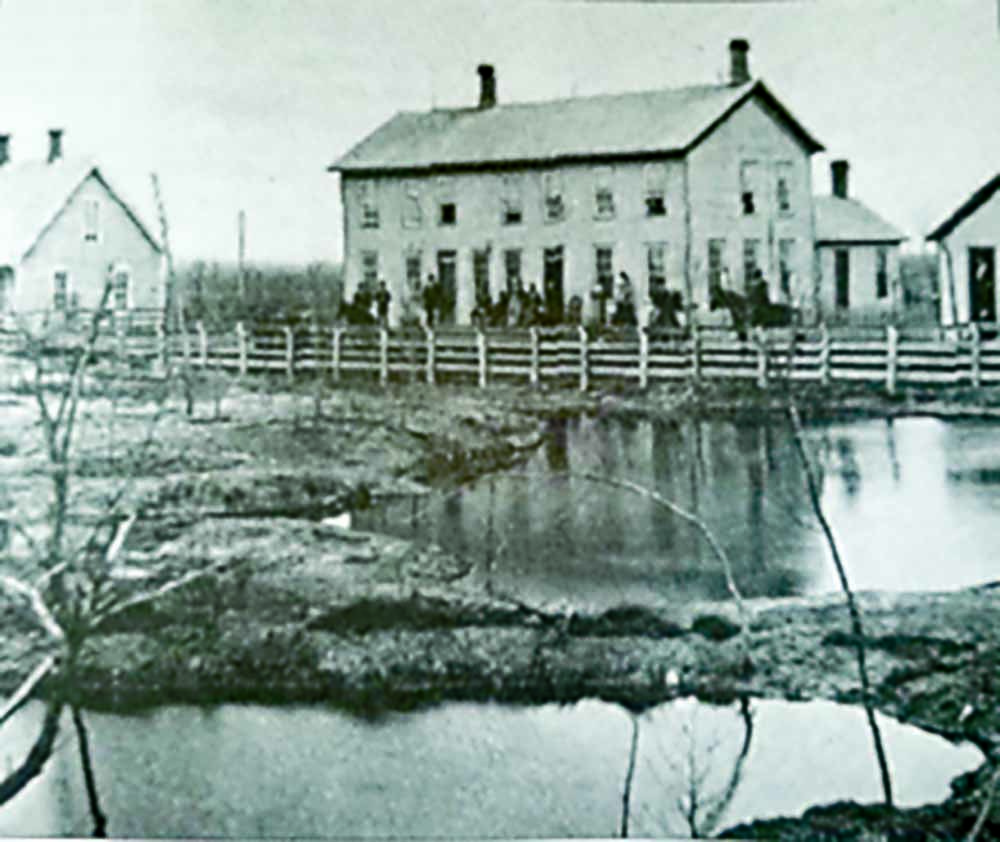 Iola Mineral Water and resort drew travelers from Kanas City, elsewhere for 'miracle' cure for all that ailed them.

Pioneer life is hard. Time for a vacation.

So where might one find this attractive gem, and will other members of high society be present to further distinguish one’s company?

Believe it or not, some of the finest ladies in all Kansas City, including Mrs. B.S. Henning, Mrs. Dr. N.N. Horton and others recommend the mineral well resort in Iola, Kansas, featuring its one-of-a-kind, unique-to-all-the-world Iola Mineral Water.

No sooner had they exited their posh palace car had they absolutely fallen in love.

“Mr. Acers, you have quite the little town here,” one dreams of them saying as they greeted their host at the park. “I also heard a rumor that the baths in your resort were once tubs from the distillery. Is that so?”

“Guilty as charged,” grinned the attorney-proprietor, as a blast from the jet black Santa Fe engine sounded on the tracks nearby.

The train hadn’t been passing through for more than a couple of years, but it was nonetheless a welcome sight bringing along with it the potential for countless guests.

Acers and crew had initially been prospecting for coal east of the tracks near today’s Riverside Park, but as former Register editor Charles Scott put it, “by a quirk of chance the bit that drilled into a gas pocket simultaneously opened a vein of mineral-laden salt water.”

The Water of Life. A wondrous substance to cure all that ails you.

Others, like the ladies from Kansas City, likely hadn’t come to be “cured,” but imbibed the putrid water all the same, with its delectable concoction of sulfurous saltiness.

Bathed in it, too, in their striped, full-body swimwear, while likely keeping their social distance from the afflicted.

In the 1870s, there was quite the menagerie of avoidables, though all listed as within the purview of the Mineral Water’s curative powers: erysipelatous, syphilitic, scrofulous and fever sores; sore eyes, catarrh, general debility, liver and kidney disease, blood poison, rheumatism, necrosis, hemorrhoids, pimples, asthma, headaches and heart disease.

But no matter what was bringing you down, you could be miraculously healed for “between seven to 12 dollars a week.”

Couldn’t make it in person? The proprietors shipped bottled Iola Mineral Water across the U.S. and around the globe, with enthusiastic converts as far away as Europe.

“Looking at the shipping book it appears the waters of the singular well have been sent out to 18 states, one territory, the District of Columbia and to London, proving clearly that how little value has been attached to the water at home, it has much significance abroad.”

INDEED, the devotees were innumerable, and fervent.

“Sir, I am 74 years old, and for fifty years I had a fever sore on my leg. I tried all remedies in my reach, and was treated by many eminent physicians all to no lasting benefit.”

“In August 1874, I commenced using Iola mineral water very freely. I drank two gallons some days, and bathed my leg often. In two weeks the sore was entirely healed, and the lameness soon disappeared. I am now entirely well. I use no medicines whatever.”

Maybe one gets accustomed to the eggy smell and snotty texture after a while? I mean, anything that offensive to the senses has got to be good for you, right?

Standing atop the Sante Fe railbed west of Acers Park, I dreamed him there, walking near the artificial lake surrounded by pine and cedar trees, taking a dip in the fetid pools heated by gas from underground.

Years earlier, he’d contracted smallpox, and would later suffer a skin condition from it. Yet no matter what he did, the eczema persisted.

After seeking a cure for years, he’d found it. That miraculous Iola Mineral Water.

Holden was so blown away he even bought a managing interest in the spa outfit. Like the railroads who advertised the destination, he meant to cash in.

Quite a few others did as well, and by 1900, you could even get a Mineral Water on draft in downtown Iola.

Spencer’s, a local hangout, once served two large tanks of the stuff to parched customers on a hot July day.

By 1912, “city and county commissioners agreed to a drinking fountain from which would flow Iola mineral water to be erected in the northeast corner of the public square.”

It wasn’t too much extra effort, as enterprising commissioners had already (unsuccessfully) drilled for gas in the southeast corner a few years earlier.

YES, gas. The other wondrous substance that was going to make Iola the industrial center of the midwest, maybe the entire country.

It was already the secret to the magic elixir at Nelson Acers’ resort, that which (at least temporarily) converted him from an attorney and politician into a slick entrepreneur.

And astonishingly, by the late 1890s wells were drilled that “turned Iola from a sleepy village to a roaring industrial center.”

By 1907, the town’s claim to industrial preeminence was undisputed and its economy was soaring.

But in less than a decade, the boom would go bust, with millions of cubic feet of gas having been unwittingly wasted.

In the words of Charles Scott, “the death of Iola’s dream of becoming the industrial metropolis of the state was swift and sure.”